Seeing communities suffer from the effects of COVID-19 and the massive potential in young people to mitigate the spread of the virus, the City of Houston created the Community Health Education Fellows (CHEF) program. The CHEF program hires young people to be trained as community health workers and contact tracers. They work in 22 Houston super-neighborhoods identified as most affected by COVID-19. We interviewed the first CHEF cohort to gain insight into some of the community work they are doing in the coronavirus pandemic. Read more CHEF stories.

Grace Danas is an 18 year old high school graduate representing the Pleasantville neighborhood as a CHEF. We interviewed Grace about her experience in the pandemic as a community health worker. Below is a brief transcript of our conversation. 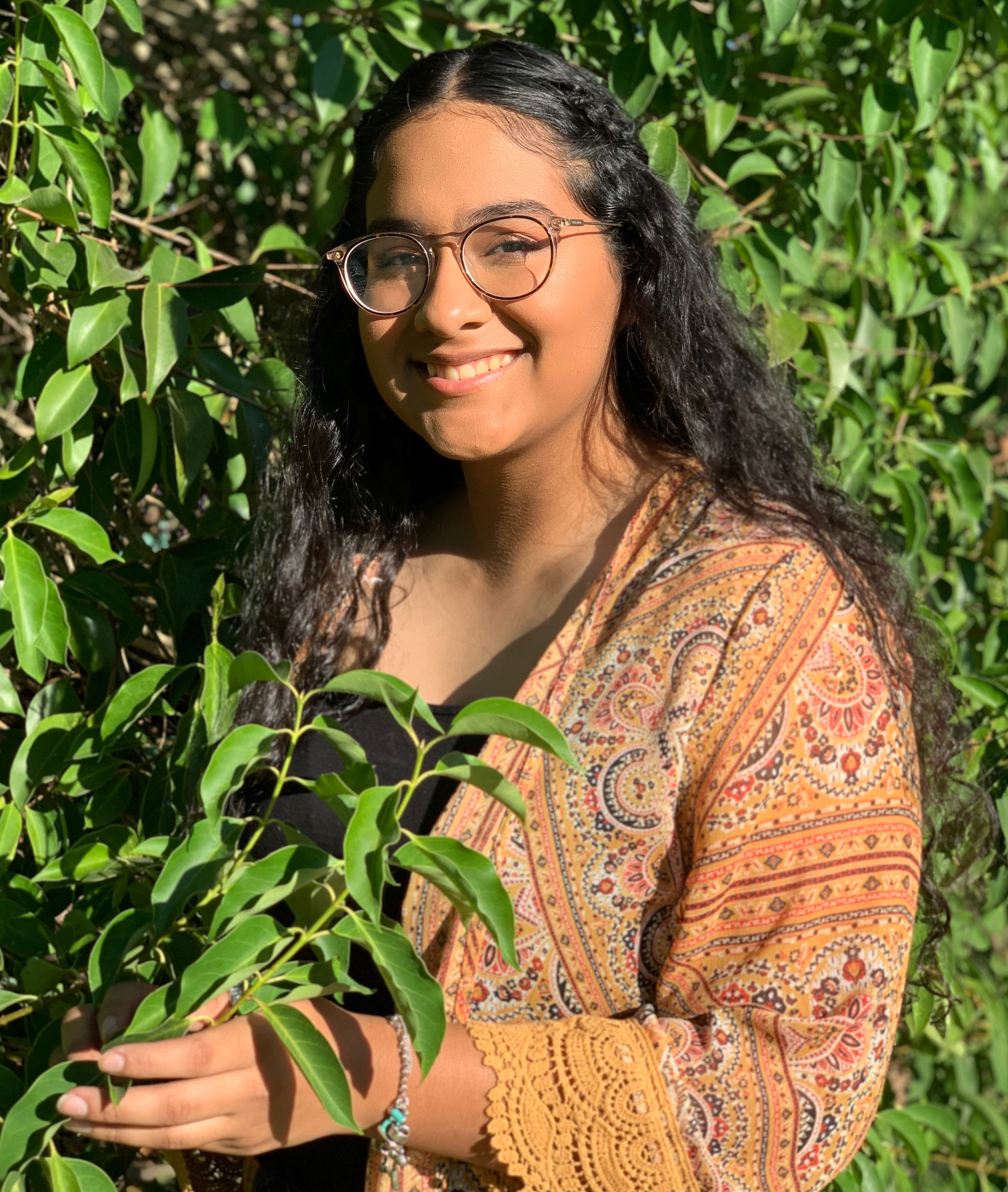 Tell me a bit more about yourself and your experiences during this pandemic.

I just graduated high school, and I plan to go to college because my future career goal is to become a veterinarian. As far as the pandemic, it's been a challenge. I was not always in a good mindset after the pandemic started, because school and graduation were not great, and we missed high school traditions. And personally in my household, we take more precautions because my mom has a weak immune system. So every time we go out, we wait another two weeks before we do again, just to make sure everything's good. So that holds us back from our usual lifestyles.

How do you think you see this pandemic differently as a young person?

I take it more into consideration because they say it affects older people, but then again over 100,000 kids tested positive for it in one week—I read an article about it. And since the younger generation has a lot of communication on social media, I think we should use that to promote that it's a real thing and we have to be aware because some people don't even think it's real. They think it's a myth, which doesn't make sense. But then you have other people my age that are kind of careless right now and they're just living their lives and going to the beach and the malls and you've got to remember to get a mask, but if they seem happy, that's also good, but then again you don't want to make other people's lives worse. I don't understand their mindset, but that's the way I see it. It varies and I think people my age should use their position in life to help other people.

How has the pandemic and or CHEF, changed the way you think about inequalities?

I've noticed that living in my community, I thought everything was fair because we have the grocery stores, we have pharmacies and clinics. My neighborhood is like a small town because we have our own fire department, and they don't even consider us in the Houston district even though we're in the city. Like if you cross the freeway, it says "entering Houston." I'm confused about that, but I've noticed after being in this program that there is something called the "reverse C" on the Houston map. The performance levels on academics for students is like a reverse C because on the East and the Northside, it's not that great but when you go towards Katy and the Heights and the Memorial area it gets better, which is kind of weird.

We also noticed the same pattern for cases as well, where the cases are significantly higher on the east and north side and the south, but on the west side of Houston, there are fewer cases and there's more testing sites which I noticed, and that made me speechless, because it just doesn't make sense. Like there's more testing sites on the west side of Houston, but it should really be throughout the whole city. There was a day where I went into my neighborhood and there was an emergency clinic nearby and I drove by it because two weeks ago, I noticed they had a testing site. I searched it up on Google, and it wasn't on the list. I was curious, so I went by and it wasn't open, and I was confused because they were open for a week. So, like, how are you open one weekend and not the other? The whole situation didn't make sense.

So then I called and pretended like I was somebody who was seeking help, and I asked them, "How does it work? What are your hours?" They said I had to have an appointment and it has to be online. I also asked, "what if I don't have documentation," because there's a high rate of undocumented people. They said that they don't ask for it, but if I don't have insurance, then I still have to pay the fee and I just said "Okay," and just hung up. And I just thought about it. It's not fair because these people, if they don't have insurance, they have to pay for a test. They're just trying to seek help for their health and they are worried about possibly having Corona.

Sometimes the older communities might not really know how to access the internet and go into a website and fill out the application asking for certain things, or doing like pre screenings--they might not understand all of that. That's another thing we have to consider because they want to take the test, but then there's the barriers of the Internet and language and that's not fair.

Something that was key was the symptoms and the images they have and the curriculum. What I've been told from the guest speakers in orientation week was also good. I did write some stuff down just to kind of break it down because sometimes people don't know what asymptomatic is or just differentiating a common cold with Corona, sometimes there can be confusion there. I did take those things into consideration because we did speak to some medical people from Texas Childrens, I believe the UT Health Science Center, and I do know they are also the backbone to this curriculum. So I do trust what they say, and I feel like what they say should be promoted, like what we're working on in the workstream.

Something that it could kind of be lacking is the breakdown. Like as I said earlier, a lot of people in this community and this side of Houston often kind of just believe what the doctor says which is good most of the time, but sometimes you should also know why you're doing it, just to ensure you keep practicing good health and things like that. So just a breakdown of its importance is probably something lacking. Also, they do have a section for mental health, but I believe it should be more emphasized because just staying home every day can make people can kinda go crazy. Sometimes they get stressed or upset and they don't see their friends and family and that can really get to them. Sometimes you got to remember, like, this is happening for a reason. Even though you're staying indoors, you're helping others around you by staying aware and being positive and optimistic. Sometimes you don't have the right mindset or you just think the quarantine is not helping you, and that's how sometimes people can cause more cases to arise. So just that side of mental health, just like the stress, anxiety, depression, should be more emphasized because they are, but kind of like need to break it down to where people can read it and put themselves in that situation, so they can apply it.

What do you think you've learned about your community or yourself this summer?

For myself, just not to be as hard on myself. As I mentioned earlier, (it's pretty personal but I don't mind speaking) the personal health concern. There was just a day where I was in a shadowing opportunity with the clinic in a veterinary clinic, and I went home because I had a really strong migraine. I just couldn't keep assisting the vets and taking notes, and I went home. I don't know what happened. I was scheduling an appointment at the doctor—this was barely before the corona in like March, April, and I was getting an appointment to get checked because I just wasn't feeling well. So, I got up from bed to go tell my mom the time, and I don't know what happened. My eyes started twitching and I couldn't see, I just blacked out and suppose I seized for like a couple minutes, and then that scared me in a way. It showed me I was being hard on myself, I was stressed, I wasn't really eating that day, and I could have been dehydrated...that's what the doctor told me. That situation made me snap out of it and just be proud of where I am right now and take into consideration that everything happens for a reason. It's okay to make mistakes because sometimes I can’t be a perfectionist, and that's one thing that changed about myself. I learned to accept myself a bit more.

As for the community, I've learned that we are pretty united. There are a lot of resources, but when it comes to medical things, not everyone is quite literate. So that's something to consider. I've noticed, like a lot of people get prescriptions, they get this and that, but they don't really know what it is. And they just take it, and sometimes it just can be worrisome. I've even asked my own mom about her medication, she just says that she takes them, but she doesn't really understand what they are and that just really leads me to think that a lot of people are probably like this right now, especially with this new pandemic. They don't know what to do, and they're just living their lives. So, I've learned that they are kind of illiterate, but there's a solution to everything. So I know that by noticing these things, we can help make a change.