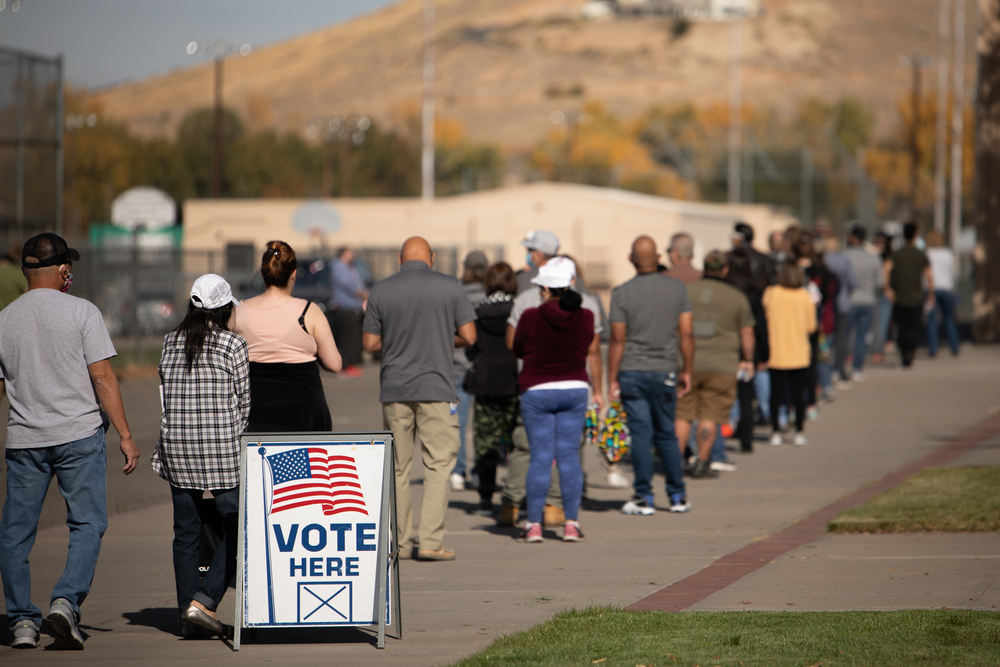 This Spanish saying, common in the Latinx community, means "the shrimp that sleeps is taken away by the current." When my relatives say this phrase, they mean "don't let the world pass by you.”

The Latinx folks in my family are fighters, and growing up in such a household brings a sense of pride. I acknowledge I’m the result of years and years of hardship and hard work. It's very important for first-generation college students like myself to remember their language, roots, and where we came from.

But during the 2020 presidential election, I wondered why Latinx folks failed to bring this pride and unstoppable character to the polls. I was shocked to find out only 25 percent of eligible Latinx voters casted their vote in Houston, according to a City University of New York study, And even back in 2012, why was voter turnout among the Latinx community only at 48 percent? Their Black and white counterparts were turning out at 67 percent and 64 percent respectively.

And the voter statistics in my hometown further proved how the 30.4 percent of eligible Latinx voters not only fail to be present nationally, but also at the local level. The 2018 election for Harris County Judge made headlines as Lina Hidalgo took the victory becoming the first woman and Latinx person to be county judge. But even though she was incredibly popular and highly supported, Hidalgo was crowned incumbent by only a slight margin of 1.5 percent. It completely contradicts the hard working and fighting spirit of our culture and what it means to be Latinx in the United States.

We aren’t going above and beyond in the highly broadcasted and talked about elections and we certainly aren’t doing our duty to voice our opinions in more local and accessible elections, such as for state, school boards, city council, governor, and many more.

‍Why could I, at the age of 14, understand the importance of voting and being civically engaged in the 2016 election, while family members continued to say, "My vote doesn't count." or "Ni les importamos al gobierno", which translates to "The government doesn't care about us."

Why did my mother vote for the first time during Barack Obama’s presidency and not for her local Texas representatives even though she had been living in the U.S. for several years already? Why did my step-dad stop voting after being taught about the importance of civic engagement? Why did his mother believe her voice couldn't make a difference? And why is their focus solely on national elections and not in state and local elections, such as the upcoming Texas governor election or the special election for City Council District G, where their efforts could directly impact and better our community?

I previously believed the reason Latinx folks weren't politically involved was due to their experiences in Mexico trickling down generations. My mother was born in Channelview, Texas but grew up in Nuevo Leon, Mexico. She lived on a ranch where women weren't exposed to politics, and she became accustomed to the negligence of the Mexican government.

My step-dad's mother never had a job until she came to the U.S., where her social bubble expanded and she became more aware of laws and workplace conditions. Before then, she had gotten married at 16 and given birth to four male children. But even now, she doesn't put much thought into voting or knowing her local representatives. According to her, these "big" political decisions aren't hers to make.

Meanwhile, my step-dad, born in Ciudad Juárez, Chihuahua, México, grew up in the same private and reserved household as his mom. However, alongside his three male siblings, he recalls moments when his father taught him about the "reality" of the world he lived in. He remembers the passion his father displayed while on tangents about the good-doings of the president at the time.

‍When I talked to Angelica Razo, the Texas director of Mi Familia Vota who strives to engage Latinx communities, she told me, "[Latinx folks are] coming from a country with political distress, they're trying to survive. — They came from Mexico [only knowing that] their country doesn't want to help them." This further proved my belief of how Latinx folks have internalized fear and mistrust due to their upbringings and experiences with other corrupt governments.

And when I spoke to Mario Salinas, who currently works under Harris County Precinct Two dedicating his time to solidifying the growth and future of the Latinx vote, he said, "Latin[x folks] need to understand that the [U.S. and Mexican government] aren't the same. If you're playing a game, you aren't gonna be thinking about last week's game, you're gonna have your head in the game currently occurring. If they have their minds in another country [when they think about politics], they're doing it wrong. They're thinking about the wrong game."

But I also realized the problem is rooted deeper than this. My step-dad, raised in the typical misogynistic and close-minded Latinx household, has never approved of my progressive, liberating, and feminist mindset as it completely contradicts what I was raised to believe by my family. He once told me, "Si tú hubieras nacido en una familia en México que viene con esos pensamientos — tu familia te cierra muchas puertas para que tu no seas quien quieres ser. Tu misma familia.. No el gobierno." In other words, if I had been raised in Mexico and gathered my "radical" mindsets, my own family would close so many doors just so I wouldn't venture out and believe in anything other than tradition. It would be one's own family, not the government, that would be the initial start to someone not voicing their opinion and being proactive.

The experience of my mother and step-grandmother made more sense. It isn't a lack of willingness to learn about civic engagement. It was how they were raised. Just like Mario Salinas said, "[Civic engagement] is a thing you learn from your family. If you've never seen it, you're gonna be lost."

This generational gap is present and it's why people like me, a GenZer, are more proactive and aware of our surroundings.

As Angelica Razo said, "We [currently] aren't preparing future voters to be life-long voters. We haven't made an emphasis on different levels of government — we want people to vote because they have that power for their families." Every time there is any type of election, we find ourselves repeating history as we have to motivate Latinx folks to vote. It should be instinctive for us to want and need to speak up for ourselves and be active in every opportunity we have.

We use Spanish sayings like, "Camarón que se duerme se lo lleva la corriente" to share the fighter aspect of our people. But in reality, we are letting the world pass by us by allowing other people who don't know our stories to make our decisions for us. We are the shrimp in the saying who is floating away in the water. We need to engage at the national level, but more importantly, we should start closer to home with our local representatives. For example, engaging in the general election for Texas mayor this November could be the first step for many Latinx folks to begin taking initiative.

As Angelica Razo said, "[Latinx folks] wanting a better life is not radical — we need to make officials work for us, that's their job."