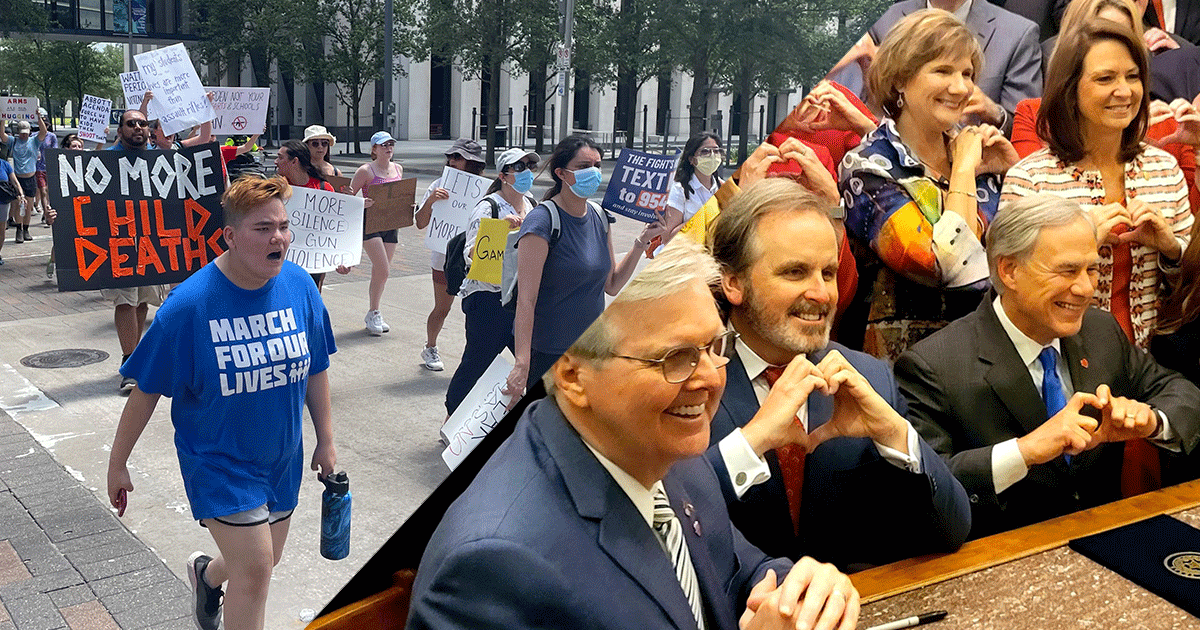 The Hypocrisy of The ‘Right to Life’ Argument in Texas

The Hypocrisy of The ‘Right to Life’ Argument in Texas

On the afternoon of May 24, 2022, I was on my phone in the comfort of my room. I opened Instagram only to be bombarded by multiple news posts reporting the same event. Instantly, I took to Safari to find out more information and was absolutely devastated by what I learned. An 18-year-old with an AR-15 had entered an elementary school in Uvalde, Texas, and massacred 19 students and 2 teachers.

Despite the lives taken at Uvalde three days earlier, on May 27, the 2022 NRA convention went on as planned in Houston. Rage brewed inside me at the thought of the NRA convention taking place no more than 5 hours from the Uvalde shooting and 30 minutes from my home in Pearland.

Exactly one month later, while still stunned by the lack of action on gun violence prevention by Texas lawmakers, I learned that protecting freedom was not a cause that applied to my body; Roe v. Wade had been overturned.

Furthermore, a philosophical commitment to protecting life should touch upon all issues that ultimately endanger life. In Pearland, like in much of the country, we struggle with a mental health crisis that is exacerbating teenage suicides. Pearland ISD puts certain students at disproportionate risk for mental health issues, those being minorities such as Black students who experience racism that could lead to trauma and LGBTQ+ students who experience similar hostility. Our high schools also contribute to the detrimental state of student mental health by enforcing overly competitive academic environments. Illnesses that may result in death aren’t limited to mental health disorders. Sexually transmitted diseases and illnesses (STDs and STIs) are serious diseases that can result in long-term health problems and death. Since sex education is not a requirement in Texas public schools, many Houston area school districts lack it and as a result, the rate of teenage STIs remain high.

There is a blatant flaw in the “pro-life” argument when one doesn't act on issues that put lives at risk. Why is the Texas GOP arguing that life needs to be preserved at fertilization when they aren’t reflecting this value by protecting living women and children being threatened by gun violence or the teenagers being threatened by mental health and sexually transmitted illnesses? Through their abortion bans, permissive gun laws, and perpetuation of mental health issues and STDs, these politicians have demonstrated that they do not have the interests of women and young people in mind.

With lives at stake, it is our responsibility to disrupt the hypocritical view of how life is upheld when our leaders refuse. Feeling helpless and defeated does not create change. While voting gives us the voice to elect the people that will defend us on larger issues like gun violence and abortion rights, we can go further by plugging into organizations that fight these life-threatening issues on a local level. In Pearland Youth Movement (PYM), students push their own agendas to combat a variety of issues in Pearland. Similar organizations, sometimes youth-led, exist in the greater Houston area, BLM Pearland and March For Our Lives Houston being a few examples. Instead of waiting for the government to make the decisions that ultimately determine our safety and rights, we must take action to protect and cherish life in every aspect.