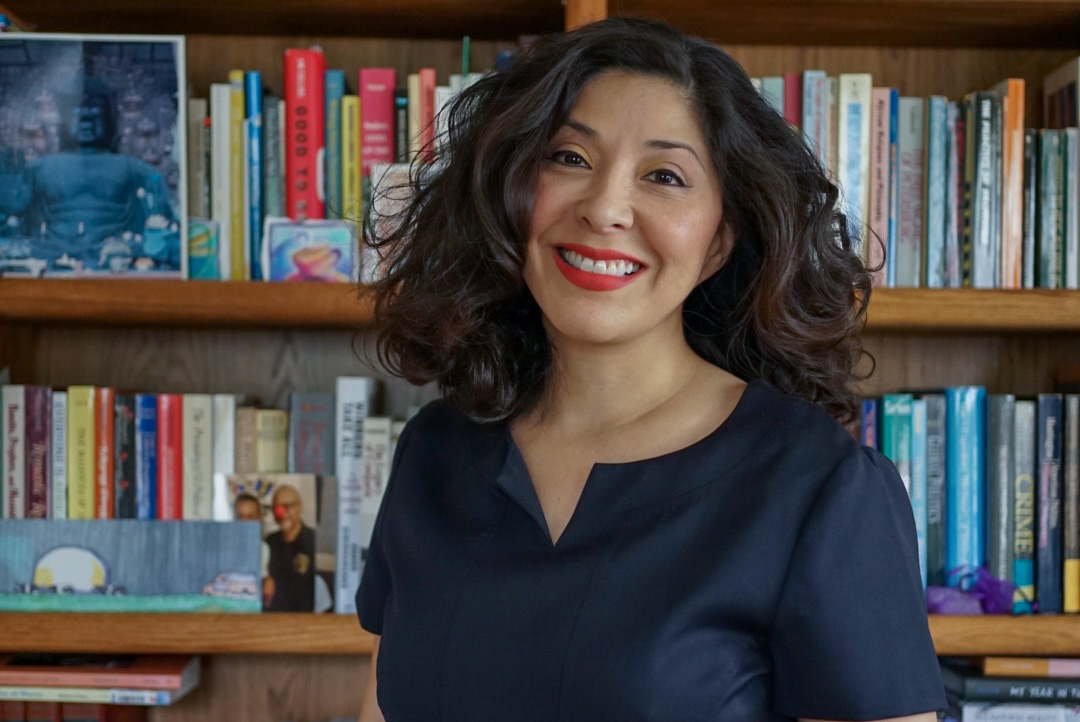 Opeyemi (Yemi) Ogundele and Jazmin Alvarez sat down virtually with Juliet Stipeche to reflect on her career as the Director of the Mayor’s Office of Education, as she prepared to step down from the position.

Yemi is a high school senior at Young Women’s College Preparatory. He was part of the first Shift Press Fellowship cohort. Jazmin is a junior at Eastwood Academy. She serves on the HISD Student Congress leadership team.

This interview will be posted in four parts, released over the next few days. The transcript has been edited for conciseness and clarity.

Yemi: It's so good to see you!

Juliet: It's good to see you too! I'm sorry that I had issues with the time and stuff. I just went on a quick trip to Santa Fe, and then I'm finishing up my last week [at the City of Houston]. I'm also studying for a test to take on Saturday for my new job.

I have to take it Saturday at 8pm and it's 150 minutes to finish, so l’m going to finish late at night! It's crazy! I'm making flashcards. I'm like back at school. I've got my book, and I got my pen.

Yemi: Oh my gosh, so now you know how we feel?

Yemi: We totally understand. I'm preparing for four exams and a scholarship. I'm just all over the place.

Juliet: Well, I sympathize. I empathize. And it's multiple choice. So even more empathy.

Yemi: Exactly! So to kick off this hour, Mrs. Stipeche, it's so wonderful to have you here. Thank you so much for taking your time to make this interview. To start, tell us a little bit about your work and your position.

Juliet: For the past five years, I have served as Mayor's Director of Education for the City of Houston. It was a newly created position, and it was the first time someone at the City was specifically devoted to educational issues. Everyone, including myself, wasn't entirely sure what it was going to entail, so Mayor offered me a lot of flexibility in creating something different and new.

My idea was to try to create something that was inclusive and collaborative without trying to take anything over. Something that was going to be very equity driven and focused, and something that helped build community. I think we've done a lot of really great things over the last five years.

Yemi: That's so wonderful. Can you talk about some of the highlights of your role as the Director of Education? And especially about the work that you've done with UNICEF?

Juliet: Yes! So Mayor at first was like, "I wanted to be transformative and innovative." Then he found out about the City summer employment program, and he was like, "Oh my gosh, how can the city of Houston, the fourth largest city in the country, have only 450 jobs available for students over the summer? Juliet, how can we expand the program?"

So I looked at what they were doing in Los Angeles and New York and DC and other big cities. And they say, plagiarism is the sincerest form of flattery as a joke, right? We saw Los Angeles had Hire LA Youth. Well, Houston now has Hire Houston Youth. You see a lot of correlations. [laughs]

But I told Mayor that in other cities, the city, the workforce board, and the school districts are working much better together. Here, everybody's trying to get limited dollars. It's like everybody's fighting against each other. So literally, I had a huge conference room table at the City of Houston, and we started inviting people to sit down at the table that had never sat down together before.

Initially, folks were apprehensive because they were like, "Are you trying to take away our work? Are you trying to take away our money? Are you trying to control the rhetoric or the mission?" A lot of people felt very nervous, and I was still trying to figure it out, too. But I told them, "You do what you do very, very well, and I have no interest in coming in and stopping someone from continuing to do good work. But wouldn't you like somebody at the city that helped you and supported you and advanced your cause? And wouldn't you feel comfortable if maybe we all came together and figured out how we could tackle the huge crisis of trying to help empower young people, especially our most vulnerable?”

Because I'm constantly hearing complaints from young people that no program responds or meets them where they are. We need to reinvent what we've been doing because the definition of insanity is doing the same thing over and over and over again and expecting different results.

Just as an example, Hire Houston Youth has 450 jobs. We invested $1.5 million in this program when I first started. By comparison, New York was investing $79,000,000 in their summer jobs program. Seventy. Nine. Million. Dollars. Washington DC, which is a fraction of Houston's size, has one of the most granddaddy programs you can imagine, and it's a huge connector for families and young people to build their social capital and find out about employment experiences. When I was on the Houston ISD school board, no one talked about trying to give paid internships and things along those lines.

Some people gave me the stink eye, and they were confused. But by the end, they were like, “Oh, my gosh, this does make sense.” I think it's because people are tired, and they get burned. It's hard to do a big grouping of people coming together. It requires a lot of respect and the building of trust. I came in fresh from the school board, and everyone was like, "She's only interested in [Houston] ISD." It required a lot of trust building.

Our first crisis was seeing how young people were disconnected, underemployed, not doing well in academics, wanting job opportunities, wanting more opportunities, and being disconnected from that. So our call to action was: what can we do to try to make the city more involved, not to take over the school district, but to serve as advocates for children and young people at the City?

Education as a Public Good

Everybody, when I first started was like, "oh, Juliet, the City doesn't do anything for education." And I was like, "Well, what are the libraries? What are the parks?" I was in a meeting where one person in the room gave a frightening statistic on what percentage of murders in Houston involved people 21 and younger.

People don't often talk about policing victims, or people that are murdered. Some of the most predominant victims of the most heinous crimes and situations are young, and there's no one there fighting for them and asking people, what can we do to improve life circumstances to make this a much better city? Until Biden is investing all this funding in the American Rescue Plan and saying we've got to change the way we're doing things, you haven't heard a lot of presidents really actively say, “I want to invest in early childhood education, I want to transform the lives of young people from zero to five.” That's something that I was ashamed and embarrassed, because as an HISD Trustee, I didn't fully recognize and appreciate and understand that.

My perspective when I was at the City was that all these stupid bubble-in exams, all these idiot measures, aren't taking into account what's really going on in the lives of young people. And if you take a school and you're forcing kids to bubble in exams and fit these different types of criteria, they're not all going through the same life circumstances. The neighborhoods are different, the experiences are different, the traumas, the child, the opportunities are different. And I'm not saying to just make everything totally different. But I am saying one, raise awareness of what's happening, two, include youth voice, and three, make sure that children and youth have a place and space to be able to help us make a better, more equitable community.

So we're creating these programs and we're trying to increase youth voice, and so we started with Hire Houston Youth and then we move into another program called Out 2 Learn on after school opportunities, another large collective impact approach, bringing in different providers, trying to pull resources.

This is the first of four parts of a conversation with former Mayor’s Office of Education Director Juliet Stipeche. Throughout the week, we will be posting parts of the interview.