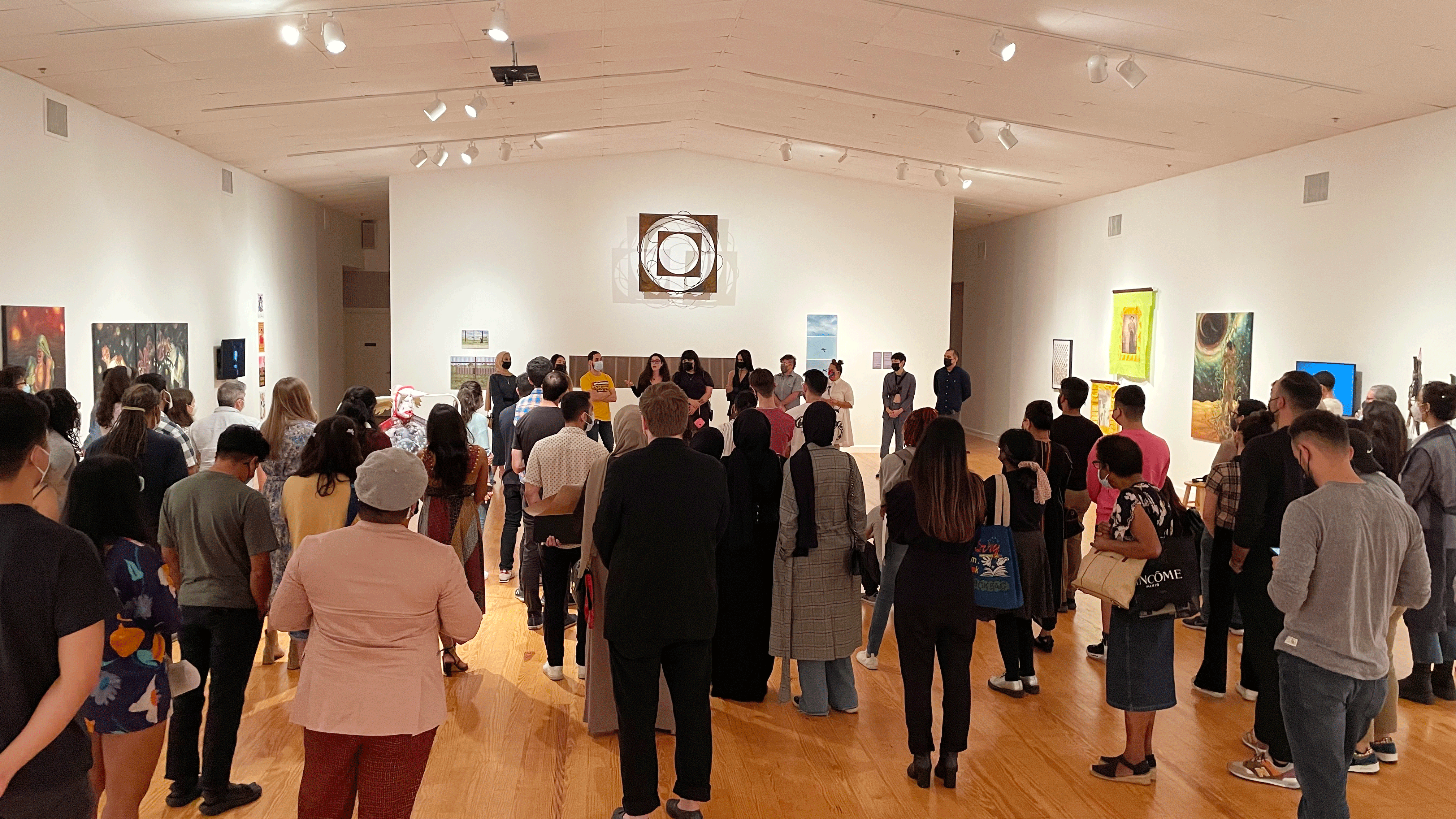 Caption:
A crowd of attendees listen to opening night remarks from the exhibition artists and organizers of "In The Sun" at the Station Museum of Contemporary Art

Uyiosa Elegon

The exhibit has drawn attention to the lived experiences of oppressed peoples.
By
Uyiosa Elegon
Published

DONATE

On October 8, 2021, Collective Artists in Solidarity with Palestine (CASP) and Palestinian Youth Momevement (PYM) opened In The Sun, an art symposium and exhibition, explores themes of interconnected struggle, familial and ancestral lineages, reimagining other ways of living outside of oppression, light and darkness, space and resistance.

The exhibition has been on view at The Station Museum of Contemporary Art and will close with artist talks Sunday, October 17, 2021 4-6 p.m.

Through an array of visual mediums, the artists are examining the narratives that inform their shared histories. The exhibition is also in response to The Holocaust Museum of Houston’s (HMH) refusal to publicly denounce the Zionist Israeli State’s genocidal occupation of Palestinian indigenous land.

Artists originally slated to participate in HMHs “Withstand: Latinx Art In Times of Conflict” exhibition requested an acknowledgement after HMH posted Zionist propagada on its Instagram page. After weeks of requests, artists Angel Lartigue and Moe Penders, removed their pieces from the exhibition.

In a statement released by CASP, the artist collective condemned the Holocaust Museum of Houston’s inability to acknowledge Israeli-led apartheid and called for cultural art centers around the city to stand in solidarity with Palestine.

“It’s sad and unfortunate,” said Lina, an exhibition organizer. “The Holocaust museum unfortunately, despite commemorating a horrible memory in peoples’ history, is invested in Zionism and maintaining that political mind.”

The Holocaust Museum of Houston has not issued a statement on the matter.

The Station Museum has seen an inpour of visitors to view the works of the Palestinian, Black American, Salvadorean, Mexican, Vietnamese, Filipino, and Honduran artists. The huge turnout has not surprised exhibition organizer Mohammed Nabulsi.

“I think it reflects the diversity behind the actual organizers who took this project on,” said Nabulsi. “We thought to ourselves: what can we do together that is constructive, that brings our communities together, that brings our experiences and thoughts together?”

At the opening night, exhibition artist Lina Habazi shared her excitement for the event.

“In an act of solidarity,” Habazi said, “artists of all backgrounds came together for this exhibit to lift each other and create a space where we could all comfortably tell our stories.”

“I appreciate that the museum has held their values and continued to provide a space for the voices of Palestinians and other oppressed peoples,” said Habazi.