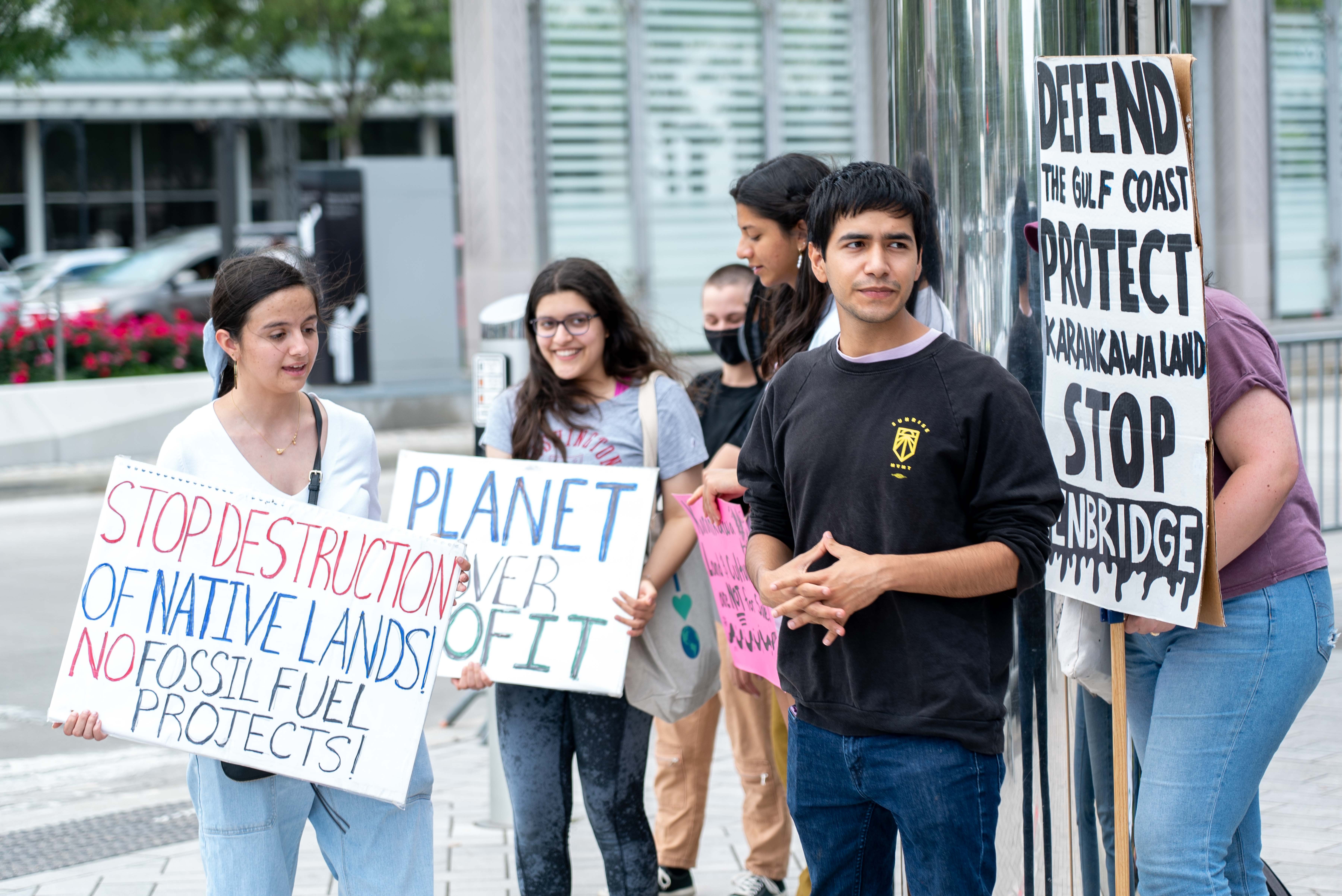 On April 23, 2022, Houston Youth Climate Strike, a youth-led organization focused on peaceful climate demonstrations, rallied at the intersection of Post Oak and Westheimer to protest the petrochemical company Enbridge expanding its Moda Terminal in Corpus Christi.

The rally supported the Karankawa Kadla, an indigenous group that settled on the Gulf Coast between current-day Galveston and Corpus Christi. The proposed pier and oil export terminal would intrude into the eastern portion of a Karankawa settlement in Ingleside, Texas, and destroy key Karankawa artifacts (some of which are over 2,000 years old) and essential marshlands.

‍Organizers against Enbridge are hoping for the seizure of oil export expansion, a designated historical marking on Karankawa land, and protection for wetlands and archaeological sites. Anika Shethia, one of Houston Youth Climate Strike’s general coordinators, said “As a youth organizer living in Texas, it is clear that companies like Enbridge continue to violate the sovereignty and right to ancestral lands of Indigenous peoples of the Gulf Coast.”

The rally attracted over thirty people with organizations including Extinction Rebellion, Earth Uprising, and Sunrise Houston at a bustling intersection near the Galleria. The protesters ranged from high school students to employees of the clean energy sector.

Julia Lewis, another Houston Youth Climate Strike general coordinator, voiced that “While many of the attendees were not Indigenous themselves, everyone had a shared love and appreciation both for our earth itself and for the people who have inhabited this land much longer than any of us. As we stood there chanting and beating our drums, I was reminded of the power of peaceful demonstration.”

Climate organizations organized a similar action on January 22nd to protest Enbridge's continuing with the proposed expansion. When Enbridge initially acquired the terminal in October 2021, they were already on the radar of environmental and indigenous groups due to their Line 3 expansion, a proposed pipeline that would transport tar sands from Canada to Wisconsin.

Enbridge has established policy regarding Indigenous peoples’ rights in their expansion projects, namely to “Acknowledge the history and diversity of Indigenous Peoples and recognize their distinct rights as protected by Canadian and U.S. laws;”. However, the Karankawa people believe that Enbridge’s efforts are not enough due to an absence of policy concerning artifacts and tribal traditions. Last year, the Karankawa and associated coalitions also brought forward legal action against the U.S. Army Corps of Engineers, citing that the proposed terminal violates the Clean Water Act and the National Environmental Policy Act.

Many climate organizers have a close relationship with the Karankawa that enables events like this rally to happen. Felipe, an organizer from Sunrise Houston, expressed that “[This rally is] important to me because having connections to Indigenous tribes and being friends with them… It’s not just about raising awareness for the [injustices] that they're still going through, but it's also about recognizing what they have already lost.”

Chiara, a descendent of the Karankawa Kadla Tribe and a member of the Hawks Clan, affirmed that the land “is medicinal, not just for the spirit and the mind—but for the body. This land is where we’ve been for at least the last 2000 years. It’s where our sacred artifacts are that our ancestors made, but most importantly, it is part of our Mother Earth. Mother Earth gives us all we need to survive and all she asks in return is that we take care of her and protect her, so, we are simply doing what is right.”

After the action, many ralliers appeared reflective. Shethia said, “The action was incredibly empowering and offered a glimpse at our community’s resilience in the face of colonialist economic endeavors. The power of our collective voices was truly inspiring, and I am certain that we will continue to advocate for the preservation of Indigenous lands and culture and the end to petrochemical expansion in our communities, even in the face of adversity.”

On May 9th, 2022, the Indigenous Peoples of the Coastal Bend announced that Enbridge has delayed its expansion to after October 24th. This would allow "the tribe, Indigenous groups, and their legal team to construct a stronger argument in order to protect the sacred site.”

But even in hope, concerns remain. Chiara said that “my fear is we will not be able to keep this fire alive as people start to lose interest. The date is just halted, and not together canceled.”

We won’t see the protection against gun violence unless we make our voices heard.

A student body resolution urging the University of Houston to divest from war profiteering heads to a vote.