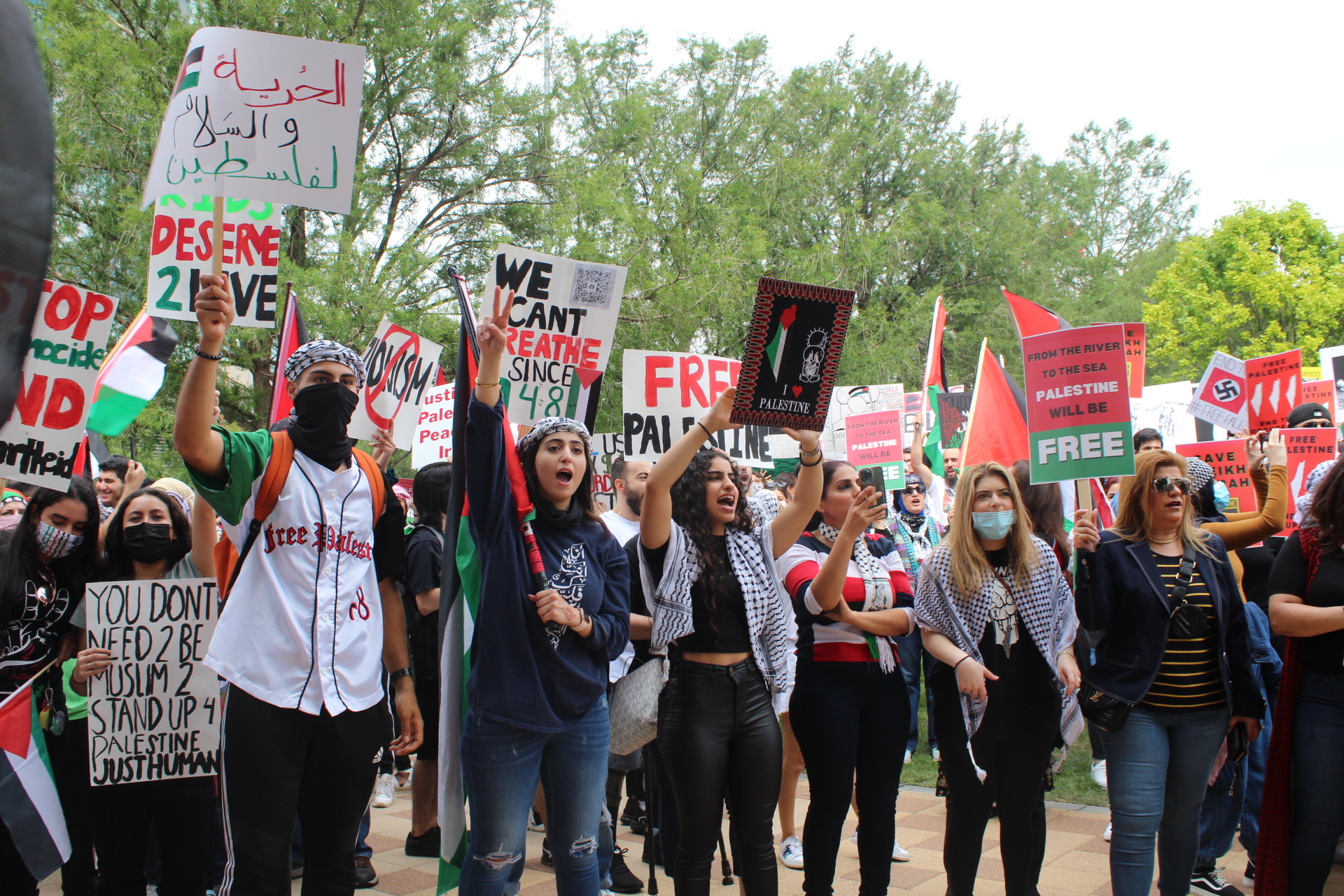 Organizers from two youth organizations—Students for Justice in Palestine (SJP) and Palestinian Youth Movement (PYM)—led a rally this past Saturday, May 15th in Houston to protest the Israeli occupation of Palestine.

The protest drew thousands of families to downtown where they marched from Discovery Green to City Hall. The diverse, multigenerational crowd marched side by side, chanting, singing and waving Palestinian flags under the city’s skyline.

“It is important for young people to (lead the movement) because if young people are moving it, we get everyone to move with us,” said Dina, 23, a member of SJP.

This was one of many protests coordinated by young people around the world in remembrance of the mass displacement and destruction of Palestinian society in 1948.

“Today is the 73rd commemoration of the beginning of what we in Palestine call al Nakba, or the catastrophe, in which Israel destroyed over 530 Palestinian villages and displaced 750 thousand Palestinians,” said Fouad, 21, a member of Students for Justice in Palestine at the University of Houston. “This now amounts to 7 million Palestinian refugees worldwide denied the ability to return to their home.”

Both SJP and PYM are part of a transnational network of youth organizers in the struggle for the liberation of Palestine. Young activists and community leaders spoke out at the event condemning the recent militarized aggression in Sheikh Jarrah that has expelled Palestinians and destroyed their homes.

“This day we are commemorating is compounded by recent intensification of violence and aggression against the Palestinian people by Israel all across historic Palestine. In Sheikh Jarrah, which is a Palestinian neighborhood in East Jerusalem, Palestinian home defenders are facing live ammunition and home invasion by Israeli forces. Illegal Israeli settlers march, chanting “death to Arab” down streets with guns and knives. In Gaza, Israel is shelling a country that already has no access to their land, their air, and their sea,” said Fouad in an interview.

Speakers also spoke against US support for Israel and emphasized the importance of standing in solidarity with oppressed people everywhere.

Many of the youth organizers are inspired and motivated by their relatives’ personal experiences under Israeli occupation and subsequent displacement.

“[The Palestinian struggle] lives generation through generation because our political identity is rooted in struggle,” said Lina, 24, general coordinator of PYM, Houston chapter.

Another organizer, Dina, noted “My mom remembers not being able to go to school for weeks and hiding in underground tunnels while Israel was bombing their refugee camp. My family right now still live in refugee camps in Lebanon. I can’t name an organizer who hasn’t been affected.”

In the US, youth organizers have always been at the helm of the Palestinian solidarity movement.

“The youth have the energy. We have the bravery and the courage. We aren’t afraid of anything. If we know injustice is going on, we will do whatever it takes to make it heard. The youth carry movements all around the world,” said Sarah, 23, member of SJP.